Honda recently inaugurated a park in Sector 17, Gurugram. The infrastructure inside the park-like track & shed development and lightning is done by Honda. 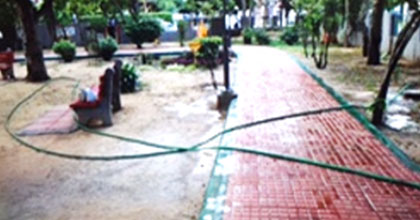 Honda recently inaugurated a park in Sector 17, Gurugram. The infrastructure inside the park-like track & shed development and lightning is done by Honda.

Maintenance of Tree Planted at Manesar

At the 2015 UN Climate Change Conference in Paris, India and France jointly launched the International Solar Alliance (ISA) with the goal to mitigate climate change and provide clean, affordable and renewable energy to all through the utilization of solar power. Hence, India can play a significant role in achieving an ISA target of 1 TW of solar energy by 2030 by becoming a major contributor towards it. By 2022, India's ISA goal is to produce 100 GW solar energy. Keeping that in view, Honda commissioned a 25KW Solar Power set up in addition to already existing 600KW solar power set up in Manesar plant.

With a total population of around 8 lakh people, Gurugram is a prominent city in the northern state of Haryana. A leading financial and industrial hub in the region, the city is often referred to as a 'concrete jungle' owing to a large number of commercial and residential complexes that make up the greater part of the city. Through the project “Make Gurgaon Green”, Honda has decided to invest a part of its CSR Initiative in partnering with Uthaan, a non-governmental organisation working in the field of vermiculture, organic cultivation, herbal planting, green movement, and conservation of non-renewable fossil fuels (particularly through solar energy promotion, to help make Gurgaon a greener and cleaner city.

Uthaan plans to add greenery to Gurgaon's upcoming road - Southern Peripheral Road (also commonly known as Golf Course Extension Road). In order to do so, the organization developed the 3.5 km long central verge into a green patch by planting more than 150 samplings and plants.

The goal of the project apart from enhancing environmental impacts is to make the city roads more aesthetic and beautify its surroundings. The project is aiming to initiate a copy-cat effect in the region by acting as an example for other organizations and individuals to follow suit. If successful in this endeavor, the project can, by extension, affect the population of 876,824 individuals of Gurgaon.